So You Created An Oracle Deck
The term “Oracle deck” includes Tarot, LeNormand and Kipper paradigms as well as an incredible array of stand-alone designs. In fact, a deck of standard poker cards becomes an Oracle Deck when used that way. The number of decks available to purchase now is definitely in the thousands; Print On Demand and crowd-sourced funding has greatly expanded a designer’s options from licensing to a major publisher or paying to print, store and then sell hundreds of copies.

Publishing Strategies
Licensing a deck to a traditional publishing company (US Games, Llewellyn, etc) offers perhaps the greatest retail distribution, although for a reduced share of revenue, with long launch times. and loss of control. And is still a rare occurrence as each company generally has only a small number of new releases each year.

There are 3 other ways to publish your deck; each a variation of ‘self-publishing’. 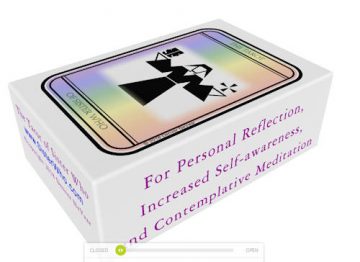 At one time, the only way to self-publish a book (or deck) at a reasonable cost-per-copy was to have a printer do a run of 500 or more copies. This is still an option, although the investment of money, time and energy to have a deck printed in bulk and then have to store, market and sell it oneself is extensive. Inventory, shipping, sales taxes, damaged or missing shipments- all those details!

Back in the dark (pre-Internet) days, advertising would be done on radio, in newspapers, or in magazines. Payment would often be sent via a cheque- which took forever to clear. Not impossible to make money, but requiring a huge investment. While paperback books can now be inexpensively printed in smaller runs, the marketing and distribution work remains. 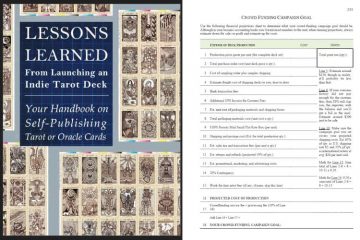 Using a crowd-source website to fund a deck is incredibly popular at the moment. Such sites offer deck designers the ability to pre-sell their decks so they can then order in bulk for maximum volume pricing. Printers overseas have lower labour & operating costs that more than make up for the additional shipping costs. So long as campaign supporters are aware of the longer lead times.

Those crowd-sourced sites offer various kinds of support, but as with every form of self-publishing the bulk of Marketing effort and expense is on the creator. From creating the artwork to designing the campaign (pricing, premiums, marketing materials) to advertising and being very available on Social Media, to receiving (then shipping out) the finished product and any bumps along the way, a successful Oracle Deck campaign can easily consume most of your life for an entire year.

Not every deck creator has the ability or desire to do so. If you do, check out the book shown here; Lessons Learned by Benebell Wen.

In addition to volume discounts and lower overseas production costs, crowd-funding projects are able to offer fancy packaging. While this obviously appeals to deck collectors, many Card Readers no longer keep their decks wrapped in a cloth. Anyone spending significantly more than US$20 on a deck appreciates a truly custom box; perhaps fabric lined or printed on the interior. A cardboard insert to hold the cards in the middle of a larger box that includes a book, and a fabric pull or fabric hinges.

Over-all, crowd-funded campaigns are ‘upscaling’ their packaging. Crowd-funded decks are generally printed overseas and shipped via boat. Having a few dozen or few hundred boxes assembled by hand is not as expensive as it necessarily would be if done domestically.

Some artists- generally those with a solid existing base of supporters- will bypass a Crowd-Funding website and run a Pre-Order campaign on their own. Much of the content of Benebell Wen’s book mentioned above applies to those situations as well.

The corporatocracy decided some time ago that global production allowed them to maximize profit… and created a system that worked (somewhat). At least until recently.

The global impact of covid-19 has shined lights on the many weaknesses, if not outright failure, of much of those systems. Even without calculating the long-term destruction of global shipping powered by fossil fuels, excessive energy consumption, and mining for ‘precious’ (often dangerous) minerals, the pandemic has opened at least some peoples’ eyes.

For a deep look at the current state of custom oracle & playing card production, both here in the USA and overseas, check out this interview with the founder of Shuffled Ink; the Florida-based printer that specializes in tarot and oracle cards. 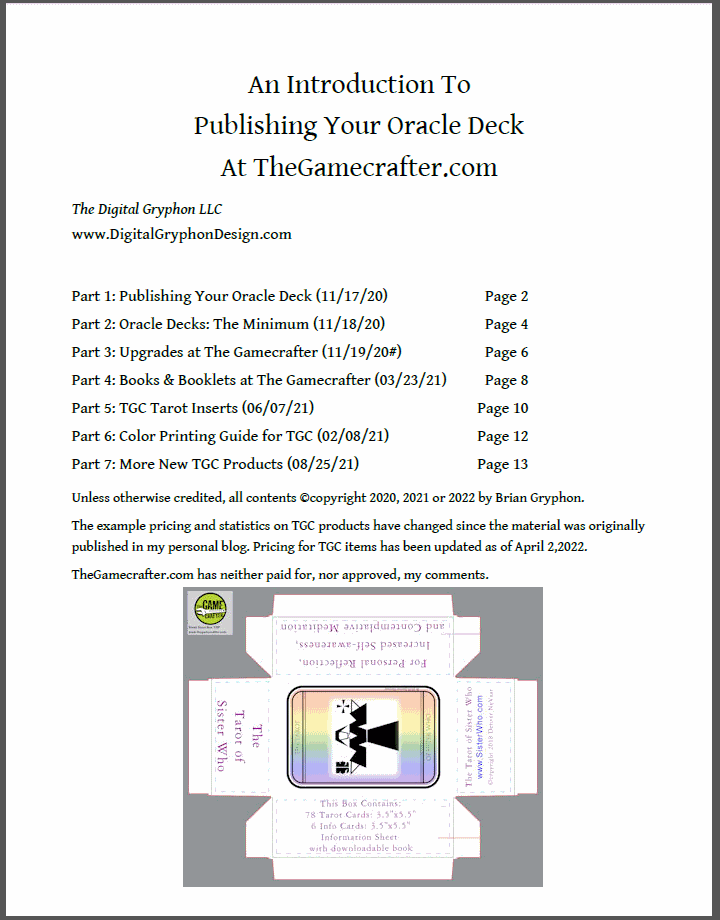 Do you think of POD (Print On Demand) sites as just producing a single tee shirt or coffee mug to order? That’s the most common type. The Gamecrafter (TGC) is a different sort of POD site; established in Wisconsin in 2001 to produce tabletop games to order. Of course decks of cards are a common part of such games, and TGC has a fabulous deck production system in place.

As POD is still a form of self-publishing, designers are still responsible for marketing their creation. But TGC deals with processing payments, collecting & remitting sales taxes, delivery delays and claims for damage. What a relief. Also, it’s much easier to take a break for a few months from marketing your deck once it’s published in their marketplace, then in the midst of a crowd-funding campaign.

I helped Sister Who publish The Tarot of Sister Who at The Gamecrafter and then created Choose JOY (Sister Flirt’s Meditation Tin and Portable Altar), also available at TGC. I love the quality of their product, and would like to help other deck creators use them. And perhaps encourage designers to offer some of the upgrades they have available.

If the thought of taking your project from art files to finished product at TGC seems overwhelming, I can certainly provide support; from an initial consultation to managing the entire TGC experience. Please contact me via contact(at)digitalgryphon(dot)com.

This page started as a pair of posts (now expanded to 6) at my personal blog on using The GameCrafter. The entire series is available as a downloadable 16 page .pdf. Updated as of April 2, 2022.

The link above to Benebell Wen’s Lessons Learned is not an Affiliate link; I don’t earn a commission should you follow it and wisely purchase any of Benebell’s fabulous material.

Update, May 2022:
I am in the process of testing out MPC: Make Playing Cards, the Hong Kong-based Print On Demand website. I will be posting updates of my experience as it happens.